Walking and The Gait Cycle

The three phases of a step are: 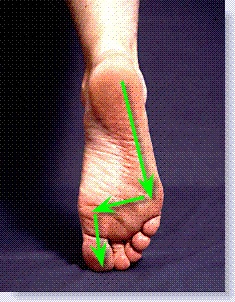 1. Heel Strike - When the heel hits the ground, its outer edge touches first. Soft tissues (muscles, tendons and ligaments) relax. Your foot is able to flatten, adapt to uneven surfaces, and absorb the shock of touchdown.
2. Mid-Stance - During mid-stance, your heel is below the ankle bone, and the front and back of your foot are aligned. Your foot easily bears your weight.
3. Heel Lift - As the heel lifts, it swings slightly to the inside. Muscles, tendons and ligaments tighten. Your foot regains its arch, allowing your toes to push your weight off the ground.

The swing phase consists of 40% of normal gait cycle and occurs from toe-off to heel strike. During this phase the foot remains supinated. Supination shortens the foot, which helps it to clear the ground. Supination also minimizes the energy expenditure necessary for ground clearance as the non weight-bearing limb passes the weight-bearing limb. Supination stabilizes the bony architecture of the foot thus preparing it for heel strike, when the foot must absorb the shock of striking the ground.

CONTACT US AND SCHEDULE YOUR COMPUTERIZED FOOTMAXX GAIT ANALYSIS