Osteoporosis refers to a loss of bone mass in which the bones become porous and fragile. 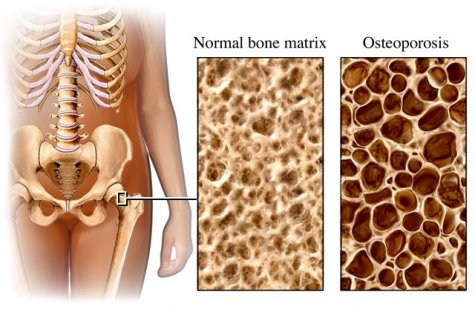 The body is constantly building up and breaking down bone tissue; that's normal. Bone density (the degree of mineralization of the bone matrix) usually increases until about the age of 30. But after that, trouble can begin. Osteoporosis sets in when more bone is lost than can be rebuilt. Eventually, bones become brittle and easily fractured.

What is estrogen's role in bone health?

Estrogen plays an important role in maintaining bone mass.  Once women reach menopause and estrogen levels decline, bone loss escalates. Rapid bone loss continues for about five years during menopause, and can reach three to four percent of total bone mass. This surge of bone loss eventually tapers off after a few years, and is about equal to the amount of bone loss in men of the same age. But the loss of bone minerals continues throughout the rest of a person's life.

Consequences of Osteoporosis
About one out of every three postmenopausal women has osteoporosis. Osteoporosis leads to fractures, particularly of the hip, vertebrae and wrists.  Fractures can have serious consequences as well.  About 20 percent of women who undergo  hip replacement surgery due to a hip fracture die within one year.  And half of those who survive will require full time nursing care. 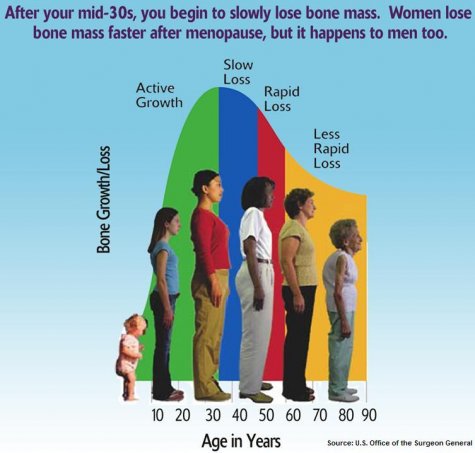 What are the risk factors?

Are men at risk for Osteoporosis?
Certainly men are not immune to osteoporosis.  Bone loss is more gradual in men, but once they reach 70 their risk for osteoporosis increases significantly. Men in this age group are at increased risk for fractures, particularly if they are sedentary and have a diet low in calcium.

What tests are used to diagnose osteoporosis?
The most accurate testing method to measure bone density and diagnose osteoporosis or osteopenia is the DEXA (Dual Energy X-ray Absorptiometry), which uses a computer to scan an image of the hip and spine.  Less accurate screening methods are now available in pharmacies and health fairs.  X -rays, which were used in the past, are not sensitive.  At least 25% of bone loss has to occur before osteoporosis can be diagnosed from a routine X-ray.

What can I do to prevent Osteoporosis?

What should I look for in a calcium supplement?
There are many different forms of calcium. Although most of them are similar, there appears to be some increase in absorption of calcium citrate, especially in older adults.

What is the best way to take calcium?
To ensure maximum absorption, take with meals and limit to 500 mg per dosage.
Are there any other nutrients that I should be concerned about for bone health?
There are additional vitamins and minerals that play an important role in bone health. The ones we suggest adding include: