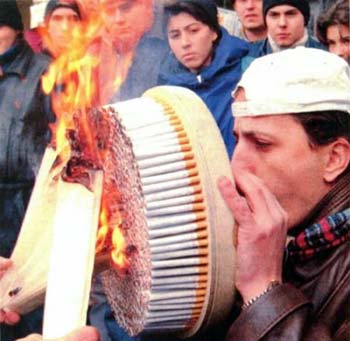 Cigarette smoking, the main way we take in nicotine, is the single greatest cause of preventable diseases (these are the progressive, serious diseases) and probably creates the most difficult addiction of the commonly used drugs. Smoking is a high-priced addictive pleasure (and sometimes displeasure) that is costly, not only in dollars but also in lives as well.

In the United States alone, cigarette smoking causes a third to a half million deaths per year (over 1,000 per day) and is responsible for about 25 percent of the cancer deaths and 30-40 percent of the coronary heart disease. It also increases the incidence of: atherosclerosis; strokes; and peripheral vascular disease. Diseases of the lungs: colds; flu's; acute bronchitis; pneumonia; COPD (chronic obstructive pulmonary disease) which includes emphysema and chronic bronchitis; and lung cancer are all much more common in smokers. Other infections or allergies are also prevalent. Rapid aging of the body and especially the skin results from the generally poor oxygenation of tissues and the other chemicals and physiological effects of regular cigarette smoking.

Smoking clearly decreases life expectancy for all age groups. One-pack-a-day smokers double their chances of death between the ages of 50 and 60, while two-packers triple theirs. And smoking also affects the life expectancy of non-smokers close to them in heart and proximity. Of all the common drugs, nicotine intake from cigarette smoking clearly has the least benefits and the most negative consequences.

The estimated cost of smoking is somewhere between $50 and $100 billion a year. Some 650 billion cigarettes are sold yearly in the United States in this $18-25 billion mega-business. The 650 billion count averages about 4,000 cigarettes per year per person over age 18. Recent estimates suggest that about 38 percent of the over-18 population in the United States smoke. Percentages of adult smokers are even much higher in most European countries and some parts of Asia. In addition to the cost of the cigarettes, there are many billions spent medically to treat the problems that afflict smokers and many more billions in lost work and productivity caused from diseases generated by smoking.