Prostate Problems? Hidden In More Ways Than One
An average man will go through the first four decades of his life giving very little, if any, thought to his prostate. In fact, a poll conducted in 2007 showed that nine out of ten men did not know what the prostate gland was even though prostate disease affects 60% of men between the ages of 40 and 60. 1,2 It is usually not until the prostate starts causing problems that a man will consider the huge role this tiny gland plays in his life-and this usually begins around forty. This blithe disregard for one of his most important male-specific organs not only reflects a distinctly male reluctance to address issues of health but also a generalized social reluctance due to its largely unpopular location. Because men enjoy a more comfortable rapport with their chiropractors than their physicians, they will more likely discuss the manifest symptoms of prostate disorders with chiropractors. With the aging baby boomer population, it is increasingly important for chiropractors to be able to recognize the signs of prostate problems and become a first line of defense.

What Is the Prostate?
The prostate is a walnut-shaped gland that wraps around the urethra and is situated at the base of the bladder behind the rectum. It is an internal organ but easily and most directly accessed through the rectal wall, which is why a prostate exam always involves anxiety, a glove, and a natural orifice. The prostate gets very little attention, 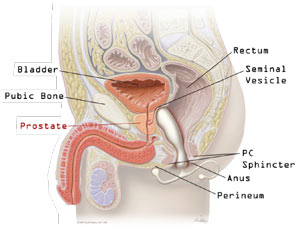 quietly and essentially contributing to normal sexual function, until one day it decides to start causing trouble-and trouble goes by many names: prostatitis, benign prostatic hyperplasia (BPH), tumors, or cancer. Prostatitis and BPH are the two most common prostate problems exhibited in men, with the former presiding in men under fifty and the latter in men over fifty.3

Prostatitis is the inflammation and/or infection of the prostate gland. It can either be acute bacterial, chronic bacterial, non-bacterial (NBP), or asymptomatic. Prostatitis is especially tricky because physicians almost always treat the disease with antibiotics, yet statistics indicate that over 90 percent of patients are diagnosed with NBP.4 Treatment, therefore, is still controversial and indefinite at best. Although many prostate disease symptoms overlap, prostatitis is most often associated with a frequent urge to urinate, difficulty urinating, pain or burning during urination, and chills and fever.

BPH is the most common disorder of the prostate gland, and is characterized by problems such as frequent urination, urgency, leaking or dribbling, and a weak or hesitant urine stream.5 BPH is the non-cancerous enlargement of the prostate that causes a subsequent stricture of the urethra.

This, combined with the consequent urinary retention, causes most of the adverse effects associated with BPH. The standard treatment choices of watchful waiting, surgery, and drug and supplement therapy are of limited effectiveness and have significant side effects such as incontinence and impotence.

Complications due to poor prostate health extend beyond urinary dysfunction to sexual dysfunction and, more broadly, severe detriment to the quality of life. What is worse, the path to wellness has two barriers to surmount. In a culture where boys are taught not to cry, not to complain, and to face injury with fortitude, these boys grow into men that are more likely to stick their heads in the sand when it comes to their own health. A 2008 poll of one thousand men forty-five years and older found that nearly one in three men ignore frequent nighttime urination, a common symptom of prostate problems, thinking it to be a normal consequence of aging that they must learn to live with.6

Men's Heath Issues Not as Popular as Women's
Additionally, the idea that men also have gender specific health needs is a relatively new concept. When you Google "women's health," the top listing is an organization. The top listing for "men's health" is the general interest magazine. Because women bear children and have reproductive organs that are internal, women are more accustomed to internal examinations. This fact, along with more lenient social mores, helps account for the great success of women's healthcare advocacy groups, making issues such as breast cancer awareness second nature. In contrast, a 2005 Macmillan Cancer Relief survey showed that 60-70 percent of men are unsure of the signs and symptoms of prostate cancer.7 When you take into consideration the 2008 Am 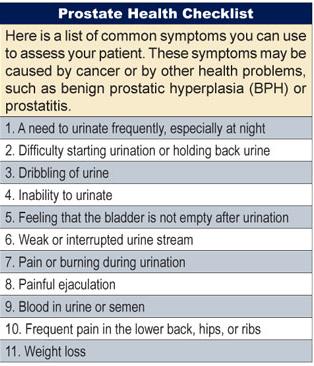 erican Cancer Society estimates of 186,320 cases of prostate cancer versus 182,460 cases of breast cancer,8 the dismal disparity in awareness is shocking. In order to make successful advances in prostate healthcare, men must also get to know their bodies better and be willing to seek advice.

What Can Be Done to Treat or Prevent Prostate Problems?
Despite this prevalence of prostate disease, there is still a dearth of information and funding on prostate research. Also, because some men object to prostate examinations, they are not a requisite part of a man's physical exam. As in the standard procedure for any health ailment, diet and exercise are critical in maintaining prostate health. Supplements such as vitamin D, selenium, lycopene, saw palmetto, and green tea extract have been shown to help maintain and promote normal prostate function.

For centuries, the now alternative therapy of prostate massage was employed as a main treatment for chronic prostatitis. With the advent of drugs and surgery, prostate massage fell out of favor in the US in the late 1960's.9 However, in a case of "when old becomes new again," due to high failure rates of standard medical therapy, prostate massage is once again being utilized as a complementary and alternative means to improving prostate health. Independent studies have shown that prostate massage can significantly help release prostate inflammatory aggregates, and that up to two-thirds of patients do obtain some relief from symptoms after a four week period of repetitive massage entailing gentle digital pressure moving from the lateral margin of the superior portion of a selected lobe of the prostate toward the apex.10,11

The primary goal of the massage is to simply increase blood flow to the compromised tissues and promote healing by bathing the area in fresh oxygen and nutrients. Massage can also help drain occluded prostatic ducts to allow antibiotics and supplements better delivery into the gland. It is important that prostate massage is gentle to protect the sensitive gland from injury and/or the spread of bacteria. Safe, effective massage can be requested in a physician's office or, alternately, can be conducted in the privacy of one's own home. As digital rectal massage has the potential to be a traumatic experience for all parties involved, there is a hands-free device available. Prostate massage has also been shown to have positive and pleasurable effects on sexual health. Usually, if the health part doesn't get them, the sex part will, and either way, it is a step in the right direction if men take responsibility for their own health.

Every year, millions of men suffer needlessly because of a lack of awareness. Prostate problems exhibit telltale signs, and all prostate problems have a better prognosis when treated early. The time is long overdue for a community driven change that will encourage men to take a proactive approach to a healthy life for themselves and their families. Every man has a prostate, and if you are a man lucky enough to live to eighty, the CDC almost guarantees you will have issues with it.13 Talk about it. While it is sure to elicit more than a few giggles and guffaws, unless we discuss the vital and complicated role the prostate plays in men's health and sexuality, we remain powerless in effecting a change.

We look forward to hearing from you

Find us on the map